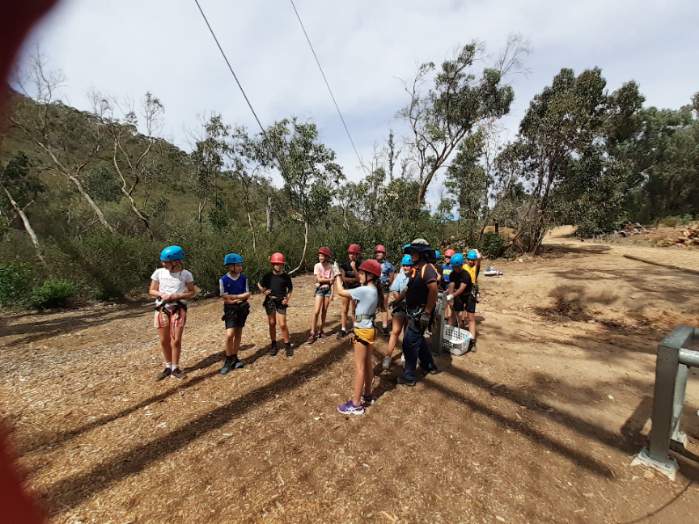 On Monday the 15th of March, the year 6s left Parky Primary for a leadership day at Bickley Recreational ground in Orange Grove. Our activities were- Rafting, vertical challenge and catapulting (and no we didn’t catapult each other unfortunately). We were put into groups of 14 and rotated every hour and a half. We all had a really great time and I think Miss Mc Garry, Mrs Taylor and Mrs Critchell had a wonderful time also getting to hang out with the wonderful year 6s.

The rafting activity was based in the water. We were split in two teams of 7. We had to build our own raft that could float and be stable enough for all 7 members of the team to go out on the water with. The equipment we had to use were: three pontoons, nine pieces of rope and three wood planks. This activity was a favorite for most! We had to work together as a team to put our raft together along with directing it out on the water together. Many laughs were had, along with some healthy competitiveness for who could complete the water challenges the fastest.

The vertical challenge required concentration, bravery, working as a team to make sure we were safe and listening skills. In the introductory whoever your instructor was would tell you how to be safe and how to put your harness and helmet on. There were three different obstacles: The caterpillar, which was two large logs combined with rocks as stepping stones to climb up that we were. A rope ladder that wobbled with every step up and a giant cargo net that moved constantly. It was here where a lot of our year 6s faced their fear of heights. Safe to say they that everyone gave it a go! The year 6s went and conquered!

The day was so much fun! One in which no one will forget about I’m sure. On behalf of the year 6s we would like to thank everyone who helped make this leadership day happen! One for the memory books.

Information from our School Psychologist

Bust Out In Blue